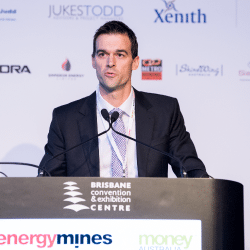 Innovation in the supply chain will be needed to help vanadium flow battery producers compete for the rare mineral, which is also in demand from steel producers, according to one of Australia’s emerging vanadium developers.

“We have already seen a significant increase in the consumption of vanadium for energy storage from 2016 to 2017, which increased from below 100 T/annum to over 2000T/annum,” Mr McCarthy.

“To put this demand into perspective, a single 200MW/800MWh vanadium flow battery being manufactured in China by Rongke Power will require approximately four per cent of the annual global vanadium pentoxide consumption.”

“Through vertical integration, companies such as Multicom can drive the market penetration of vanadium flow batteries, and in doing so can reasonably expect that within the next decade, vanadium consumption for batteries could become the major influence on its demand.

“Multicom is already in discussions with the Townsville City Council about the development of a Vanadium Flow Battery manufacturing and distribution facility,” continued McCarthy.

These discussions are supported by the binding Heads of Agreement between Multicom and US firm StorEn Technologies Inc, under which the company intends to establish a vertically integrated supply chain model for the manufacture, sale and distribution of StorEn’s Vanadium based batteries.

The company is also a core member of the New Battery Industry Co-operative Research Centre bid. If successful, the bid will focus on a positioning Australia as a globally strategic provider for the future battery industries value chain and transform the energy sector.

While McCarthy said that many new names are entering the vanadium space, he doesn’t see an oversupply of the commodity on the horizon.

“This is a great opportunity for new projects to come online during a growing market and establish long-term, mutually beneficial commercial agreements with strategic offtake partners,” he said.

If demand for vanadium flow batteries does as expected, then McCarthy believes that Multicom will prove to be an appealing investment.

“The Saint Elmo deposit will be low cost and low impact, with the pit never extending beyond 20m in depth and the soft sedimentary rock ensuring no requirement for drill and blast.

“Multicom’s Executive team has travelled through Asia and Europe building collaborative relationships with offtake partners and has obtained Letters of intent with three of these companies, in addition to the binding agreement with our battery partner, StorEn Technologies.”

Henry Ford first became aware of vanadium in 1905. He recognised that vanadium steel’s high tensile strength would allow him to make a stronger, lighter, better performing car. Over a century later and companies in the renewable sector are beginning to realise the element’s potential for next-gen batteries.

About Multicom Resources
Multicom evolved from the discovery of a large scale one-billion-barrel oil shale resource across the three exploration permits now known as the Yappar Project. Analysis of the mineral content of the oil shale revealed significant amounts of vanadium, molybdenum and alumina. With global interest in vanadium increasing, Multicom Resources has been able to establish strategic partnerships with international institutions and technology specialists looking to exploit vanadium’s unique properties, high demand and short supply. Multicom Resources made a corporate decision to re-focus in the short to medium term on a pure-play vanadium project. As a result the Saint Elmo project was secured and is currently being rapidly developed.

About Energy Mines and Money Australia
Energy Mines and Money Australia showcases strategic mineral, coal, oil and gas opportunities, matching projects with global investment throughout a two-day conference and exhibition at the Brisbane Convention & Exhibition Centre from 11-13 June 2019. Supported by the Queensland Government, the programme will examine the trends and forecasts that will shape investment and development for the mining, oil and gas industries moving forward.