Is the coal industry dying, and will it be a profitable death? 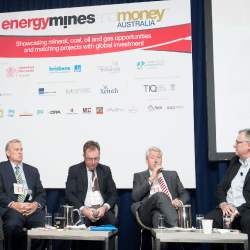 As the need for energy from all sources continues to rise across the globe, coal is finding itself in demand – but running out of backers as regulatory uncertainty and investor activism hit funding for new coal projects.

It’s a confronting issue for the industry, but one that was tackled head on this morning at 2018 Energy Mines and Money in Brisbane, where a panel including coal miners, investors, government and analysts put the spotlight on the elephant in the room.

Highlighting the many shades of the discussion was the news yesterday from the Minister for Natural Resources, Mines and Energy Dr Anthony Lynham that more than 44,000 square kilometres of exploration land is to be unlocked for Queensland’s next round of resources projects – indicating that governments still want the benefits of a strong resources sector.

Debate moderator Clyde Russell, Asia Commodities and Energy Columnist with Thompson Reuters launched the discussion by noting that coal is experiencing strong current and forecast demand from Asia. He asked the panel where the extra supply was going to come from to meet it.

Graham Chapman, Advisor to the CEO of SUEK felt it would be a massive challenge and it meant looking more broadly.

“The only really good quality coal deposit that I’m aware of is in Bangladesh. South Africa will also be a player. Of the 1.2 billion people in the world that don’t have access to electricity, the majority are in Africa,” Mr Chapman said.

Mr Russell asked panel members why there wasn’t more money flowing into coal projects and if an appetite to do coal mines in Australia even exists.

“South Africa is finding is increasingly difficult to find investors – probably more so than Australia. Essentially investors are being educated not to invest in coal in Australia because of the Adani headline saying’ it’s dirty and it should be avoided,’” Mr Galt said.

He went on to raise eyebrows by sharing some of the areas in which Taurus Funds will steer clear.

“We have taken the decision not to invest in thermal coal mines – if that’s its sole focus, and we have a blanket ban in New South Wales. We will not invest a single dollar in NSW in the future and will encourage our investors to do the same. He did, however, go some way towards reassuring a stricken audience by adding “Queensland is fine.”

“My objective for my investors is to make a profitable investment and be out of it within five years,” Mr Galt added.

Mr Russell then challenged the panel members by cautioning that, despite the bearish outlook, all may not be well as the coal industry doesn’t seem to understand the scale of the forces working against it, for example the rise of renewables and the more sophisticated approach of environmental activists, which may place a big question mark around the future of the industry.

“If coal is a dying industry, I predict it will be a very profitable death,” Mr Russell stated.

David Thurtell, Manager – Resources Economics, Department of Industry, Innovation and Science said that the prospects for MET coal industry were good, with 2-3% annual growth in demand for the short to medium term forecast. He added that thermal coal was growing at a slower rate of around 1%.

“We’re seeing a divergent trend and MET coal looks much better than thermal coal. Coal faces an ongoing fight with alternatives, LNG, and even nuclear.”

“Europe is moving away from coal; fundamentally, the world is on a different path to coal,” Mr Thurtell finished.

Given that the Cline Group is currently developing a mine, Mr Russell asked how comfortable he was that it would be able to sell its coal?

Paul Vining, CEO, of the Cline Group responded by joking “We’re coming from the US where it’s a bloodbath.”

“Coal production has declined over the past five years and gas is becoming more and more commoditised.”

“We may replace some of the tonnage currently being produced by the Asian market, but it won’t necessarily be new supply,” he offered.

When asked if there was generally more scope for higher exports from Canada and the US Mr Vining replied “Not really. The compelling MET projects are in Australia.”

The question of Russian involvement in the market was also raised. The panel was of the opinion that Russian coal deposits are good quality and relatively easy to mine so production was not an issue. However, Russia would be hampered by export logistics.

About SUEK
SUEK are one of the ten largest coal companies by reserves and sales globally. It sells coal to almost 1,900 customers in Russian, Atlantic and Asia-Pacific markets through its extensive sales and distribution network. It continues to strengthen its position as the largest coal exporter, focusing particularly on the supply of high-quality, premium-priced coal to the growth markets of Asia as well as maintaining its market share in Europe. SEUK remain the largest supplier of thermal coal to the Russian market.

About Thomson Reuters
Thomson Reuters Corporation is a Canadian multinational mass media and information firm. It enables professionals in the financial and risk, legal, tax and accounting, and media markets to make the decisions that matter most, all powered by the world’s most trusted news organisation. Thomson Reuters shares are listed on the Toronto and New York Stock Exchanges.

About Taurus Funds
Taurus Funds Management is a Sydney based, global mined commodities specialist with investments in both public and private global resources companies on behalf of institutional and wholesale clients. Taurus investment funds include Mining Private Equity and Mining Finance.

About Cline Group
Cline is a private Canadian reporting issuer in the business of acquiring, exploring and developing mineral resource properties primarily in Canada and the United States. The Company has developed its wholly owned flagship underground coal mine into production using state-of-the-art technology and equipment. Its Colorado mine has a NI 43-101 compliant Measured and Indicated Resource of 618.9 million tons of metallurgical coal which is sufficient for over 30 years of mine production. The Company is also in the process of exploring its wholly owned Cline Lake gold project after establishing an initial mineral resource of over 50,000 ounces of gold. Cline is a growth-oriented mine finder and operator with an experienced international mining team, with additional projects in the pipeline that it also expects to develop into shareholder value.